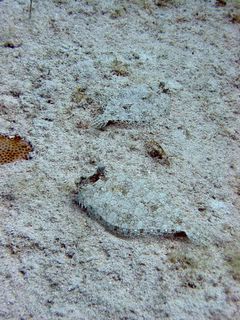 can you see two baby flounders here? They are each about three inches long 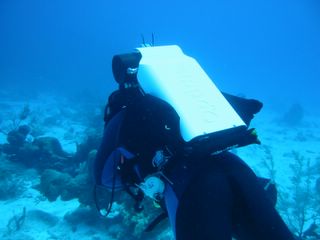 In the picture is the Optima rebreather prototype from Dive Rite. Also at Inner Space was the KISS, which is a really very well designed rebreather, some Megalodons, a couple Dragers, one Ouroboros, which is a very nice rebreather, and if I remember any more I’ll add them leter. Of course, the Inspiration and Evolution were there aplenty too! (saving the best for last!) 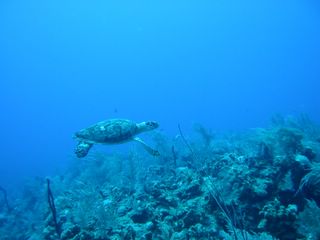 Here is a turtle from yesterdays dive. Three of us swam underwater from Cobalt Coast Resort to Dive Tech, which is really far. current was with us all the way and the normally 3 hour dive took only two. It was too easy, didn’t have to fin a kick, just glide!!!
Today was the first day of a big annual rebreather dive week, Inner Space 2005. It was excellent! We did a dive this morning, then my new rebreather electronics arrived. It is so cool and a vast improvement over the old 2 handset style. Tonight I have to figure everything out about them. I read the manual before, but it’s different now that I have the electronics in my possession.
Also I have to figure out how to work this underwater MP3 player I’ll be testing out tomorrow. It’s good to 200 feet deep so it’s really not a toy. I’ll be doing a nice long 3 hour dive tomorrow morning and then an afternoon dive too!
Inner Space actually didn’t start till 6 PM this evening but there were a lot of rebreather divers there today and there was a lot of diving going on! 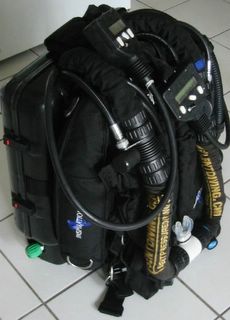 This is a picture of my rebreather. I am getting ready to go diving if this AC repairman ever gets out of here.

I’m on vacation now, and it’s all cloudy and rainy and a tropical storm in coming and it’s not even hurricane season yet!
But I don’t care! as long as the sea’s not too rough, I’ll be doing a lot of diving with my Inspiration Rebreather.

And I hope to get the new Evolution/Vision Electronics too!!!!

Anyway like I said, it’s all cloudy and rainy but it’s not all bad because my AC broke day before yesterday and I’ve slept two nights with the windows open and a fan going and there has been the most wonderful sweet smelling cool soft breeze.
It’s all good!

Well, tonight I put a counter on my blog, so I could tell how few people read this stuff.
Basically I joined Bravenet and got a piece of code that I pasted in on my template.
So far it says 000000

I am tired, I worked 12 hours today. Tomorrow is my last day before vacation!!!!! I got a lot of work to do before I go!

Last night I went to work at 9:40 pm. I got home at 20 till 6 this morning. I slept till about 9:10. I am tired.
I work at a radio station. I have transmitter problems. Here’s the deal: On an FM transmitter, basically you have the exciter, which puts out about 10 watts, which is FM stereo, on the frequency, the same thing you pick up on your radio, only at low power. then you have your intermediate power amp (IPA), which takes this 10 watts and cranks it up to about 200. The comes the final power amp (FPA) which takes this 200 watts and increases it to 3000 watts (depending on your transmitter) and sends it to your antenna. You control everything by controling the amount of power that goes to your IPA with a little knob like a volume knob on your radio.
Well, I had low power. I had been watching it drop off slowly for months and figured the tube in my final power amp was dying, as it was very old. When I got there to do the work (in the middle of the night), I found that I didn’t have enough power coming out of my IPA, But I decided to change the tube anyway, because it was so old, and changing the tube is a really big job, and I had allotted the time for it. When I got done, as expected, I still had low power. Like I said, I didn’t have enough power coming out of my IPA, only about 60 watts instead of 200. I had good 10 watts into my IPA. So I changed the IPA. Now I can get plenty of power. BUT, the old IPA has some different connectors on it than the new one, so I have to take the connectors off the old IPA and put them on the new IPA. Also, I have high reflected power between the IPA and the FPA, which probably caused the problem in the first place. So I have to repair the FPA so it doesn’t fry my new IPA. I am running at low power so the reflected is lower than the manufacturers minimum.
It’s really fun actually.
To me, the important thing is spirituality. Spirituality is much different than religion. Spirituality is contact with God as one understands God. I think no human can fully comprehend God. We can only be aware of and try to improve our understanding of God. I think religion is someone saying “God told me to tell you this, and you have to believe it above all else”. The person (or group) telling us what we must believe may or may not have any spirituality or contact with God themselves, they may merely be reciting an interpertation of what they were told!

I think that most organized religions are extremely poor sources for spirituality. I think it is good to question what we have been told ever since we were born.

I do not claim to know any more than anyone else, I am speaking from my experience and what I have learned.

Also, I am using the word God for lack of a better word. One can use any word one wants. God is what I call the creator of the universe.

Science compliments spirituality. Both seek the absolute truth. The purpose of science is to find the one physical law that governs the entire universe. Nowadays, science has many laws, some are contradictory, and therefore cannot all be true. I think that if humanity exists long enough, they will find that this one absolute law of physics and God are the same thing. Humanity may end before we figure it out. All we can do is continue as best we can, and not take ourselves so seriously.

It seems to me that the worlds religious leaders (for the most part) want to keep you away from science. They may deny it, and tell you to procede, but when you contradict their teachings they will discourage you from further pursuits. They want you to only believe what they tell you. They threaten you with grave consequences if you fail to comply. They don’t sem to care about the truth, they only seem to care about ensuring you believe what they believe. Many of them do believe what they say bacause they have been told the same thing over and over since they were infants by people who were told the same thing since THEY were infants. They do not know any better.

When a person accepts something as true, they tend to quit looking further, their mind closes. If this so called truth is in fact not true, they will seldom become aware of it. They believe unquestioningly, which to me is the most dangerous thing on earth.

A closed mind thinks it’s open and an open mind suspects it may be closed.

last night it rained for the first time in a long time. I took my dog for a walk, looking up in the sky letting the rain hit my face, tripping on stuff because I was looking up and not watching where I was going.
Since it was cloudy, the Astronomical Society meeting was canceled, but I am glad we got the rain. It hardly rains at all anymore.