But I still crave tobacco. When I smell it it smells so good. It would be nice if I could smoke just a little bit, But I’m the kind of addict who chain smokes or doesn’t smoke at all.

The other morning, I had just finished my exercises and I was walking the dogs and somebody rode by on a bicycle. It was early morning, still dark, and the guy was smoking a cigarette. I thought to myself, “I’m glad I don’t have to smoke this early in the morning”. It’s possibly my first anti tobacco thought since I quit. That bicycle smoker kind of put me off tobacco.

But still, I like the ritual of tobacco. The clipping of the cigars, the filling of the tobacco pipe. The lighters and all the paraphernalia. Many of my friends were friends because we smoked cigars together. I don’t see a large group of my friends anymore because we aren’t on the same places together.

Tobacco is the perfect addiction. It doesn’t get you high, it doesn’t alter your mind, it has no effect except the desire for more.

Have a great day.

Last night was a cigar dinner. Early birthday gift from my wife.

I really enjoyed it.

Its been rainy all week. Its like the end of hurricane season when the storms form overhead and then move way and become tropical depressions or hurricanes. Right now the sky is completely cloudy. 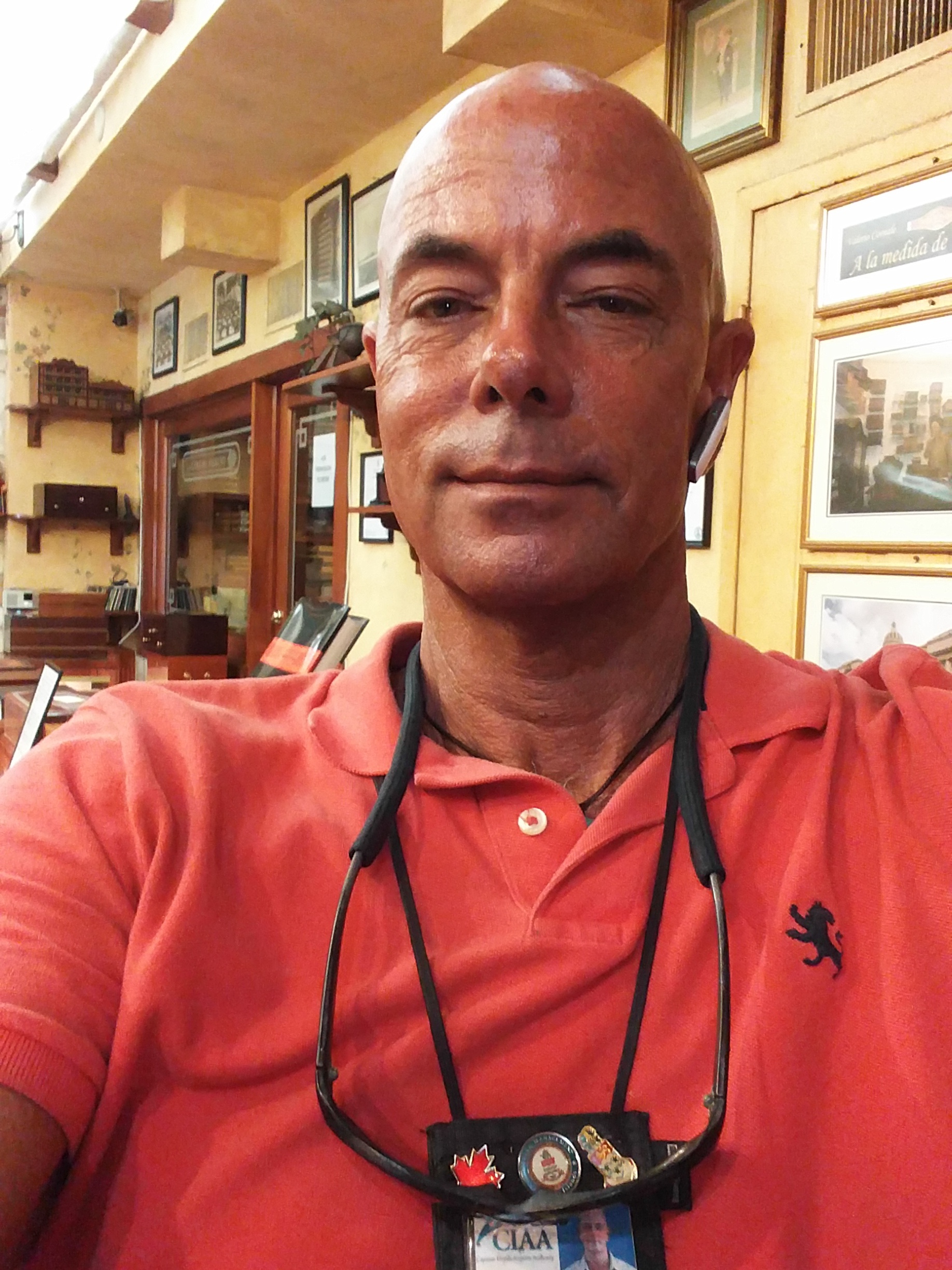 Yesterday for my lunch hour and I went to La Casa Del Habano. I took this sefie there.

I’m using my voice to text function to write this. It works pretty good.

My Last post was Thursday morning, in Miami. Thursday after school, I went looking for a denim skirt size 6 for The Wife. I was keeping an eye out all week, but Thursday I looked all over and  finally found one at Nordstroms for $211.

Got back to the room late, and started packing. It was after 1AM when I went to bed.

I got up Friday morning, finished packing and checked out of the hotel and went to school. I was hoping we’d get out early the last day of class, but no, we stayed late. The instructor printed the certificates. He was handing them out when the guy right before me said his name was spelled wrong. So. everyone (but me) had their certificates, and I had to wait till he re-printed one. It took him an hour to print one sheet. I’ve never seen anyone with an Apple computer do anything easily and without problems. Lately all the Apples I’ve seen have been running Windows.  What’s up with that? You’d never see Windows machine running Apple.  Windows doesn’t need it. And you know  that I don’t even like Windows. Also my phone rang in school, and I couldn’t answer it because I was in school. They left a voice message. I never retrieve voice messages on the road, as our phone company, LIME, is the most incredible ripoffs on the planet. I don’t even know how to get messages when roaming.

So, finally we got our good byes said and I  was on the road. My flight was 9:25 PM and I figured I could head to the beach for an hour and then head to the airport, stopping at a cigar store that was very close to the airport on the way.

I left the beach with plenty of time to spare, traffic was atrocious, 5:30 PM on a Friday afternoon, the worst of the rush hours.. The GPS wanted to put me on a toll road. I didn’t go on the tool road. I got lost and was at the southern  end of I-95. I canceled the cigar stop and programmed the GPS for the  airport. The GPS wanted me to go on the toll road. At this point I didn’t care any more, so  I went. Got to the airport (I never had to pay a toll) and checked in the car. Went to the ticket counter and was informed my 9:25 was delayed till 1 AM.

Got home about 3AM. Went to bed. Got up Saturday morning and checked my voice mail, and the call I missed in school was Cayman Airways, telling me about the delay.

After that, it was a good weekend. Yesterday was a holiday, Discovery Day. And now I’m heading into work this morning.

Overall, it was a great trip, I think it’s the first time I ever spent time in Miami, really. Usually I’m just in transit. I spent a week in Ft Lauderdale once in the early 90’s..

Have a good  week!

I miss my Cigars. I haven’t smoked a cigar in probably 8 or 10 weeks.

Cigars are more like pie and coffee than cigarettes and tobacco. I used to smoke cigarettes when I was in the Navy, I quit when I got out. With cigarettes, you gotta smoke a cigarette every 10 minutes or you go crazy. Cigars, if you’re on a plane or in  a meeting, no big deal. You never NEED a cigar like a cigarette smoker needs a cigarette.

Nope, cigars are more like pie and coffee. After you have a good slice of pie and a cuppa great coffee, you sit back and think, “Dang, that was good. I look forward to when I get to do that again.” You don’t become addicted and need pie and coffee every 10 minutes.