What a day! Work wise, not the greatest… I feel like I keep saying that!
My repaired computer died. Died hard. It cut off after a commercial. Blank screen. Shut down, won’t boot, dead. This was when I was ready to walk out the door at the end of the day. Before that, two link receivers died at the main transmitter site.
Now I bet you are thinking that I must have some kind of black cloud hanging over my head, and lately it seems I do, but not usually. It just had been recently. And it really isn’t my fault, just bad luck I rekkon. 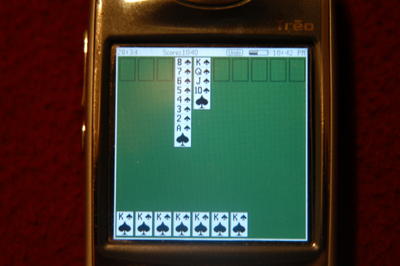 As a typical example of what kind of weird things have been happening to me lately, I took this picture of my phone just a few minutes ago after I was playing cards and came up with an incomplete deck. If I had a nine, I would win. It should be there, there’s no cards hidden! Where’s the nine? Whoever heard of an incomplete deck on an electronic game with electronic cards? Sometimes you just have to laugh!
This doesn’t happen to normal people!!!