Down the street, there is an intermittent pack of dogs that used to live at a construction site behind my apartment. After the construction was finished, the dogs moved to the street where I walk my dog. When I say intermittent, I mean sometimes they are there and sometimes they are not. At first I got a stick to fend them off when we walked by. They are fraidy cat dogs and won’t come close, but bark like crazy. One morning, in an especially dark mood, I found their barking too annoying to tolerate and I got mad. I started beating my stick on the road yelling “come here!” to the dogs. If a dog can sense a persons fear, they sensed something different in me that day, because they ran, and I mean ran over the horizon out of sight. But I mashed my stick up into bits so I needed a new one. I found a piece of PVC tubing at a concrete dumping ground. I sawed it off to the right length. I made one end pointy, to fend off dogs. I put a champange cork in my end so it is nice and comfortable to walk with. I found a wine cork on the beach, it fit perfectly, so I shoved it down inside. I bet it would float. I drilled a hole and put a lanyard through for a wrist strap and also I can carry my cell phone on it and keep it out of the sand at the beach. I can poke it down in the sand and secure my dogs leash to it while I take a swim. It’s turning into quite a sophisticated walking stick. Now, I worry about someone taking it when I leave it outside. Isn’t that moronic?
You know what else is moronic? I’m typing all this crap about my piece of junk walking stick when really I can’t stop thinking about that girl who was taken hostage recently. My personal philosophy is if a person takes a hostage, the hostage is considered dead and the hostage taker is guilty of murder. If they are in a building, then blow up the building. The hostage taker, the hostage takers family, and his country, will be held responsible for the loss. The message is that taking a hostage means certain death, will harm your country, your family, and everyone you know, and is never a way to get what you want.
But something about this girls picture gets to me. I don’t want her dead. According to my own policy, I’m supposed to consider her dead already. I don’t want to do that, I want her to get back home OK. It’s really something that I’m having a hard time not thinking about. 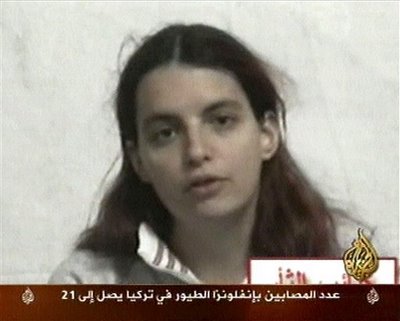 Also I realize that I wouldn’t be as concerned about it if it wasn’t a pretty girl. It makes me ask myself all kinds of questions. What kind of person am I? What if I was the hostage? How would I feel? How would I want everyone to feel? To me, growing older is like staying the same, while everybody else gets younger. I used to go to the doctor and he was an old man, now I go to the doctor and he’s a little kid. Walking down the street, everyone seems young, I remember they used to seem old to me. Looking in the mirror every day, I can’t see myself getting older. I think I’m still the same. What I see in this picture, is a person too young to be there.