Yesterday was an OK day. I had a good beach lunch hour. I sunburned my nose and the top of my pointy head. I took this picture from my car on the way back to work. I think I’ve taken pictures in my car from this spot before. It’s just a cruise ship, but they are huge! This isn’t even a particularly big one! 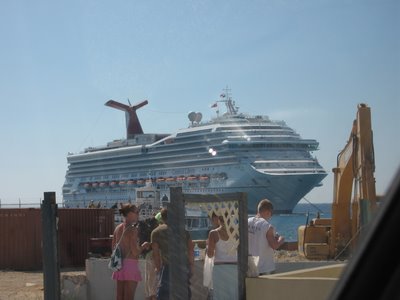 The talk show wasn’t as emotional as I’d feared. We played a lot of cuts from wen she was on the show, but the show wasn’t only about her. 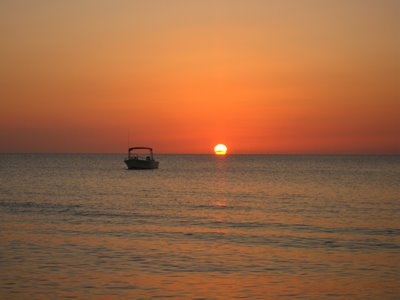 On the way home, not yesterday, but the day before, I stopped and took this picture of the sunset. I was getting home late and stopped because I’ve been trying to get a picture of the greeen flash, but there wasn’t one. The green flash occurs at the last possible instant before the sun drops below the horizon. this is just one of many many nearly identical pics I took.
I’m drinking a cup of coffee made from the first bag of Costa Rican coffee I’ve opened that I brought back with me. It’s very smooth, I think it’s a little weak. Tomorrow I’ll use heaping scoops instead of level ones.
Yesterday evening I got a call from an old girlfriend. She wants to go freediving this weekend. I said Ok. I’m not interested in her any more. Her best friend, our mutual friend, has left the island. I don’t know what she’s been doing, but I think she hasn’t been freediving since the last time we went. Nothing is going to happen, in case you’re wondering.
Another week has flown by! It’s Thursday already! Today I have to make it out for some transmitter work. Also, I’m trying to get pcAnywhere to work but am having no luck at all..
Well, that’s it for now! Have a great day!!