Historically speaking, traveling in northerly direction has been a bad sign for me. It’s colder for one thing up north and the sun is lower. But I’ve aways been more comfortable and happier heading south.
Take the last two days for example, I got on a plane, went north to Miami. In Miami I had a couple of hours so I got in a cab and spend $66 to go to a store that didn’t have what I wanted.
Then (after getting practically strip searched and air poofed and had every item in my bags wiped with a mysterious round cloth that was put in a machine to be analyzed for chenicals) I got on another plane sat on the tarmac for two hours because it was raining and apparently the union workers don’t have to load baggage in the rain or something. Finally we went north to New York. Then I got in a car and drove north where I got lost in some exceedingly crappy neighborhoods because of exceedingly crappy directions that I got from the hotel. My cell phone didn’t work in the US either because they don’t have cell phones there or because DIGICEL SUCKS! (I’ll be getting a new phone today, I’ve had it with them)
Finally I found my hotel and the next day drove north where the servce for my Uncle was. After that everybody got in a convoy and drove north to the cemetary and I parked and walked north to the gravesite. He got buried next to my Aunt and Cousin.
I was at the northernost point of my trip.
At the cemetary, after the burial, I said my goodbyes to my family and began heading south.
Travelling south, I felt better and better. I never got lost, never had a hitch, a glitch of any problem at all.
I was designed to live South. It is a scientific fact that the area between the Tropic of Cancer and the Tropic of Capricorn describes a band around the middle of the Earth. It is a lesser known fact that this band is known as the Marktic Circle. It is called the Marktic Circle because I was meant to stay inside it. 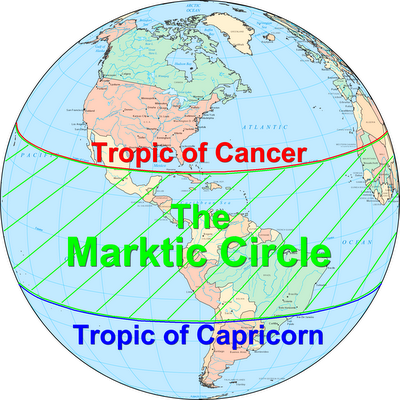 I’m glad to be home, Now I have to go see my Dad. He lives North of here.

0 thoughts on “The Marktic Circle”