Today was a good day. First I went on my turtle search beachwalk training. We found one nest and two spots where the female turtle got out of the water, checked out a spot and decided it wasn’t good enough and got back in the water without laying any eggs. We marked the nests by measuring the distance to three points nearby and raked over the nest so nobody coould find it. It two months, we’ll go back to see them hatch and help out if needed. the girl who was in charge was a biologist, if I had known what a biologist did for a living, I might have been a biologist when I grew up. She has placed a transmitter on several turtles shells and they track the turtles using satellites. HERE’S a link to the website where you can see the turtles satellite tracking info. You have to promise to not use the data for any evil purpose like turtle hunting before it will let you in.

Then I went and dropped my car off to get the drivers side window replaced. They did a really good job and found out that the glass broke because the slider broke away from the door and had to be welded, so they welded it and found a window that matched my previous tint and the tint on the passengers window on the other side. I got it back this afternoon 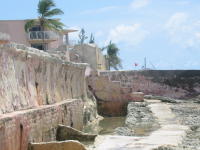 Since I didn’t have a car at lunchtime, I walked to my super top secret near town swim spot. It’s about a 10 minute walk from work and about the closest place to swim and catch some rays during lunch. I like it because its all old concrete work and looks like 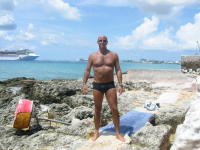 somewhere in the Mediterranean. How would I know, having never been anywhere near the Mediterranean, but it’s what it reminds me of. Here’s a picture of the “Mediterranean” concrete work and rocks and one of me, taken with the self timer.
Click here for a short video of the same place. Like I’ve said before, my camera only takes about a 15 second video, so this video is just me turning around 360 degrees in about 15 seconds. Crappy quality. You can see the two ships, one behind the other almost, the waves that aren’t usually there, an old abandoned swimming pool and the rocks that are in the picture above.

Tomorrow I have to go to work extra early, because of an outside broadcast that starts at 7:30. that means I want to be there set up by 7 at the latest. Also tomorrow I have to work late because of the talk show I always do on Wednesdays (that’s why I went to Cayman Brac last week, remember?). That means I plan on taking an extended lunch hour tomorrow! AKA Split Shift. I love that when that happens!

0 thoughts on “The day today was good.”