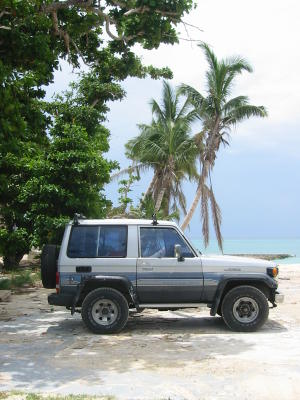 This is a picture of my car, the one with the “bad transmission”. I had another that I wanted to post but couldn’t find it so I took this one.
today I went diving. We saw one Spotted Eagle Ray. I’ve been told that if you take a plastic water bottle down with you, fill it with air and make crinkling noises it will attract sharks. So I took a half liter water bottle down and did just that. No sharks. My divemaster buddy told me that 8 out of 10 times, he has seen sharks while crinkling the bottle, I’ve done it twice without seeing any, that means the next 8 times I will definitely see sharks! Ya Hooo! One cool thing, I filled the bottle completely with air and as I ascended the air inside expanded and expanded. I thought the bottle would burst but it didn’t, when I got to the surface it was tight as a drum and very swollen looking.
Tonight I went grocery shopping. I spent $164 and came home, put the stuff away and now it seems there’s nothing to eat. My house absorbed it. I did get cookies, but already ate the whole bag. Ginger bread men. And 2 cases of water.
Anyway, I’m in a hurry to post this, so bye for now!!!!

0 thoughts on “Not Dead Yet”