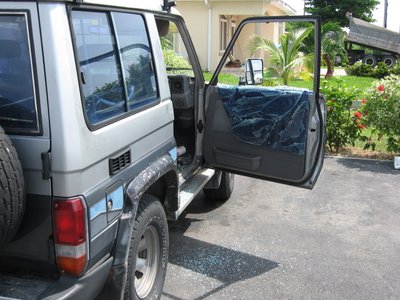 I got a new window in my car yesterday, Here’s a pic of the broken one.
Around here, it’s like a punishment, if you leave your car unlocked, this retarded crackhead insane person who walks around will rifle through your car and take whatever he can, He’s taken towels and flashlights from me, my neighbors have lost iPods and stuff. I don’t think it was the same guy night before last. He didn’t take anything, and the regular crook never broke anything. The police got some fingerprints, and all my neighbors agree to call the cops each and every time someone rifles their car. So hopefully we’ll establish a pattern and some action will eventually be taken. Everyone knows who it is, but nobody can really prove it. But like I said, I’m not sure it was the same person who broke my window.

Today I am ecxited because it is my split shift day and yesterday I didn’t go to the beach or into the sea at all. Today I’m jonesin to go.