Just got home from diving, it was a deeper one, 260 feet. The whole time I was crinkle crinkle crinkling on my water bottle and all of a sudden I hear “Muah! Muah!” (that’s what it soounds like when my buddy is yelling Mark! Mark! underwater.) I look and he’s pointing down. Guess what it was? Yep, a shark. It was a maybe 5 foot grey reef shark, no big deal. He never came very close. In fact he stayed below us the whole time, back and forth. He was definitely interested in the crinkling sound.
I filled the bottle up with air again and brought it to the surface. I don’t think it will ever explode, I think it can go up to outer space and still hold the air in it. We opened it on the boat and it sounded like opening the valve on a scuba tank. It took a full second for the air to come out. I filled it at 260 and took it to 200 and had to let some air out because it wouldn’t crinkle anymore. Then I brought it up without letting any more air out. 200 feet is 7 atmospheres. When I brought the bottle to the surface, it was at 1 atmosphere, so there was a difference of 6 atmospheres, That means there was about 88 PSI in the bottle. If I had left it full from 260 feet, there would have been about 118 PSI in the bottle at the surface. Hmmm, maybe I could get one to burst…
Anyway, the crinkling the bottle thing seems to work, the shark was definitely interested in the sound. I think they like it cooler than it is here. I had 86 degees F most of the dive and 84 at the deepest depth. I bet those sharks are staying down deeper where it is cooler. 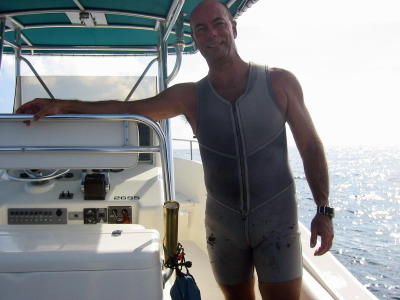 Here’s a picture of me before we got in the water today. I love this wetsuit because the zipper is in the front. I’ve had it forever, it used to be dark blue, almost black. It used to have long legs but I cut them off.

0 thoughts on “Just got home”