Hey FIFA! Wanna give somebody a drug test? I mean besides SEVEN Costa Ricans for playing a hard game.

Give one to this guy, Arjen Robben, #11 for the Netherland World Cup team. 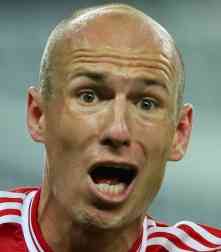 He was the only player on the Netherlands who was doing anything at all. He was in the center of every play, running around like a manic maniac.

Before the game, he got a warning about being too dramatic, which is saying a lot, considering that football players are probably the most dramatic athletes in the world.

The goalie for Costa Rica got poked in the eye, about two minutes before the shootout, somebody should have gotten a red card for that. Other than that, I gotta say the refs did a pretty fair job.

Sadly, Costa Rica is out, But they went further than ever before, against insurmountable odds.