I don’t know what to write today. Complain about work. Tell you about my run/swim this morning. Remind you what day it is. (It’s Thursday!)

I don’t have any.

Four or five months ago, my Uncle died. I went to his funeral, airfare was $1200, not counting food and car and hotel.

The month after that, my Dad got sick. I went up there. More airfare. Then my Dad died, and I went back for the funeral.

Then I paid the stamp duty on the land I bought.

Now my Mom wants me to take my Dads old car. That means flying back up, driving the car to Miami or Tampa and shipping it here. That would be a minimum of another two months of bill overload. Then when the car got here the following month, I’d have to pay duty on it. That would be coming out of the next months pay. Or the month after that.

Don’t get me wrong, a car for just the cost of shipping and duty (20%) is a good thing. But I’ve had about 5 months of impossibly high Amex bills in a row and getting the car would mean at least two more.

We don’t want to just sell my Dads, because it’s in such good shape my Mom’d never get what it was worth.

I just have to delay a couple of months on the car. . . I guess. 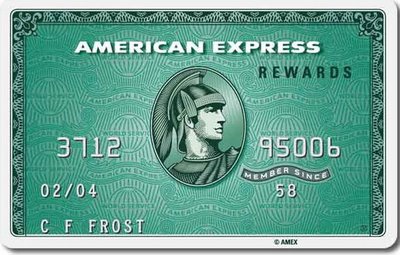 I’ve been in credit card debt before, and I NEVER want to go back. I chopped all of my credit cards up years ago and American Express is the one I have. I am a total pay-as- you-go type of guy. My only debt is my mortgage.
Remember the famous slogan, ‘If they don’t take American Express, I ain’t buyin’ a dang thing’

0 thoughts on “Don't Leave Home Without IT”