It’s Friday again, and it looks like another rainy weekend coming, to put it mildly. If Emily stays on her path, it shouldn’t be THAT bad. Huge waves wrecking the south side of the island as the storm approaches and huge waves wrecking Seven Mile Beach as it leaves, that’s if we’re lucky. If the storm turns to the right even a little bit, it will be much much worse.
I’ve been stocking up on supplies all week. I have a lot of water and canned goods and stuff. Since my landlord never fixed my apartment, I expect the roof damage to start where it left off after Ivan, so I plan on getting all my valuables out of there.

They cancelled the Half Mile Sea Swim scheduled for Saturday. Wimps. It’s just a category 4 hurricane. I woulda swum!.. swimmed, swam?
Heres a picture of my rental car. It’s not bad anymore. I’m getting used to it. I took the pic with my phone camera in the grocery store parking lot last night. It looks pretty good in the picture, but if there was a person standing next to it, you’d see that the top of the roof only comes up to about their knees! Its a tiny clown car! (I’m joking, it’s not quite that small!) 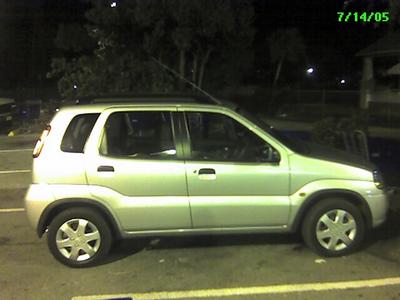 I called the repair place and told them I didn’t think it was a goner. Their receptionist told me that their transmission mechanic was off the island. Hmmm, so who said I needed to replace it? Turns out they drove it to the end of the driveway and said,”needs a new transmission” and never even looked at it. Once before the owner told me my transmission was “perfect”. I started wondering how it went from perfect to needing replacing with nothing in between. So I started asking questions….

There’s a new contest on Blogger. It’s called
“Most Boring Post”
I know this is the most boring post ever, if you know it too, click below where it says “comments” and tell me!
or tell me if you don’t…

0 thoughts on “Another Friday”