i just read on the BBC that Google has launched a new app called Duo, a video calling app. I think it’s good, I got rid of Skype way back when MSN bought it. read about it HERE

We had a front move through yesterday, and another supposed to move thru tonight. Wonder if I can squeeze a scooter rididg day in without getting soaked. Yesterday I took the car and it didn’t rain at all. Maybe a little, while I was inside.

Having trouble with my swimming app, which I installed on my vivo.(garmin VivoActive HR) Gotta play with that this morning.

I’m sitting here, watching a lightning storm in the north that has been going on since I woke up.

I ran from my house to the sea, and started to swim, but it was still dark and my heartrate monitor was visible flashing green on my wrist, and I felt like a piece of bait. So I got out and swam in the pool (At Cobalt Coast Resort)

This was the first American football weekend! Not a very good weekend. Everyone in my division lost, except for the Philedelphia Eagles. But we’re back!

The wife and I built a big grow box for the screenhouse. It came out pretty nice, but I ran out of screws. A whole box used. Getting more today.

Stargazers are set for a spectacular cosmic treat, as the Perseids blaze across the skies in what is shaping up as the biggest meteor shower of the year.

This rainy weekend, I plan on building a raised planter for the wife’s new screeen house. The first one of two. It should be a nice rainy day project.

So, with a mid-level attiyude, I wish you a good day and a great weekend!

Tonight is the first washington Redskins game of the 2016 Pre Season!

Wife and I just switched from the Fitbit Charge HR to the Garmin VivoActive HR. So far, I like the Garmin much better.

First of all, the Garmin is waterproof to 5 Atmospheres. That’s 165 feet. Secondly, riding my motorcycle doesn’t rack up extra steps and flights of stairs on the Garmin. Fitbit support sent a method to edit the number of stairs on the device, meaning I’d have to keep track manually. Thirdly, since it’s waterproof, it has a swim mode. Swimming is my main exercise. The Fitbit says it’s “splashproof”, meaning don’t wear it in the shower ot pool.

The downside of the Garmin, so far, seems to only be that it doesn’t have a section of the software to enter calories consumed. Although with the Fitbit, I found I normally consumed less than half the recommended calories on a daily basis, and never lost any weight.

The Garmin has an activity prompter, meaning that when I’m sitting at my desk at work, it will tell me to get up and move around a bit. Which I really like.

Both Fitbit and Garmin are good, but I’m liking the Garmin a whole lot better.

My whole body hurts this morning. I can’t hardly sit to type, best to keep pacing.

This morning I went running and swimming. But I think I’m sore from sleeping. The past two nights, I haven’t been able to get comfortable.

Talk to you tomorrow!

I have a new Garmin Vivoactive HR. So far, I like it, but I’m having trouble making it sync. ALSO, I created an account at Garmin, MarkD60 was already taken. I figured it was me, from my GP’s I’ve had/have, but I can’t get logged in. I am THE MarkD60 on this planet. Do not be confused. Research shall continue today.

Didn’t sleep too well last night, I think we went to bed too early.
Monday, don’t get me going. I swam this morning, it was pretty dark. I plan on snorkeling at lunchtime. Like always.

Today the Olympics Start in Brazil. Not sure I’ll be following anything.

Friday! Wife comes back Sunday. Can’t wait. I feel  like I  get tireder and tireder when whole time she’s gone.

I have a wart on my finger. I bought some drops at the pharmacy. I put a drop on the wart. Now I have a hole in my finger. How do I know when to stop? The hole gets bigger with every drop. I guess you’re supposed to keep going till you see bone. I dunno.

It’s really dark when I get up again. I needed a light to get dressed this morning. First time.

The storm passed to the south of us, we had about 10 minutes of rain and high wind while I was at work. I tried to take a video of sheets of rain, blowing across the tarmac, but the door I was standing next to blew open, hit me in the arm really hard. And the video didn’t come out! Seriously, it almost broke my arm.

Went and saw the new Star Trek movie last night. It was quite good. I’m getting a little confused about the young Spock/old Spock thing though. I guess, if there’s more Star Trek movies, Leonard Nemoy won’t be in it any more, since he passed. Is the young Spock destined to do everything the old Spock did?
This morning is quite cloudy and breezy, but supposed to be clearing up today.

I miss my wife. Even when she’s in there sleeping, it’s comforting to know she’s there. I can’t remmember my life before she was in it, and can’t imagine life without her. Four days and a wake-up till she’s home!

The shed is, for the most part, done. Just some touch up paint, to cover the newest staples. And I have a door handle and some push/pull signs for the door, just to be cute. 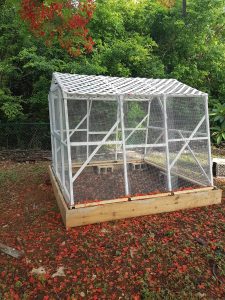 We have a little storm coming, invest 9. May be a tropical storm by the time it gets here later today.We’re supposed to get up to two inches of rain. I should put the plants out, then it won’t rain at all!

The Wife’s still in Canada, having fun. I’m getting ready for work. Have a nice day!