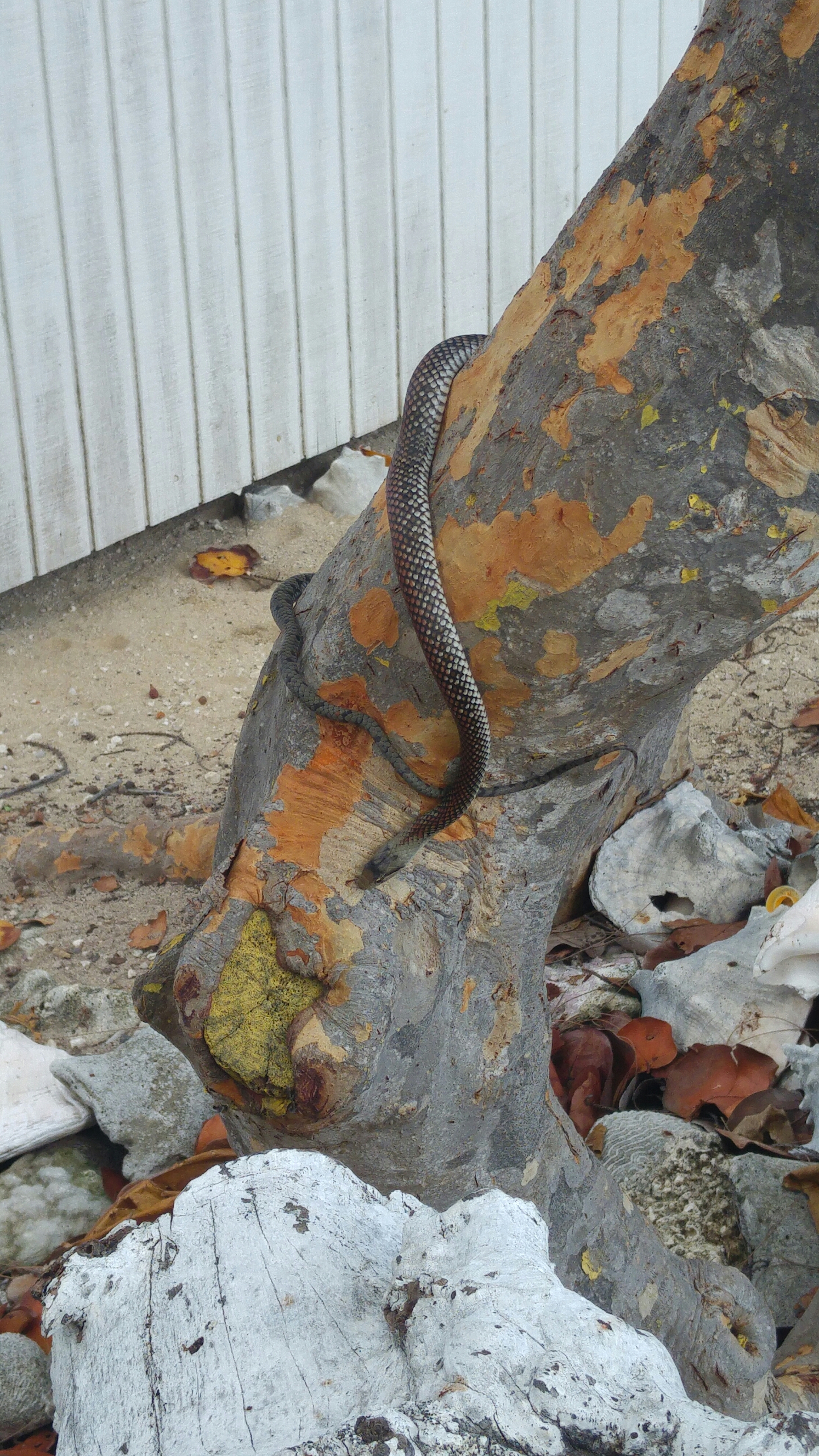 Snake, crawling all over a tree.

Wouldn’t it be spooky to climb this tree? Scurry on up there and get me a coconut!

Yesterday two police, three dogcatchers and I went and captured the dog that bit me. The lady at the house said it wasn’t her dog, but she was going to go back and get the dog, then it will be hers. The owners have been warned about controlling their animals.

Monday was a holiday, yesterday I took a sick day because of my leg, and supposedly going back to the dogs house with the dogcatcher. Now we’re supposed to go back today…

I’m going to be on TV tonight, because of the dog attack. I was interviewed. Also an online news service asked if they could use the picture of my bloody leg that I posted on Facebook.

It’s not bad today, just a couple of scabs.

Anyway, maybe tomorrow I’ll post the video of me in TV, if it happens and if I can extract it.

It was, overall, a good weekend. Went to the beach, got a lot of rest, went out to nice restaurants and had some nice meals. Got attacked by dogs…

Since I got my Fitbit, I’ve been doing a lot more walking and running.
Yesterday, (Monday the Easter holiday) I went for a walk from Cobalt Coast Resort west towards some apartments I lived in years ago. On my waay west, I passed a group of quite aggressive dogs. I walked by, mostly by ignoring them just keeping moving. One large dog, a black mastiff looking big dog came closest and butted my leg with his nose.

So I got by the dogs unscathed, and continued down the ironshore (jagged rock beach) to the sandy beach. I hung out for a while, picking up a few shells and poing around. I had pretty much decided to take the long way home, to avoid walking past the dogs again, when I saw a woman, raking the sand where the dogs were. I figured that since it was her house, they must be her dogs, and I decided to head home the way I came.

As I approached, she apparently got done raking and headed toward her house, about the same time, here come the dogs., much more aggressive this time.

things get pretty blurry after that, I was surrounded on three sides, five dogs, very close, barking and showing teeth and nipping at me. One was a very evil looking grey german shepard type with a very skinny nose. There was the mastiff looking dog again, probably the least scary, a white dog, and I can’t really remember the others. Three more dogs came from the house next door, two doberman looking dogs and I think the third was yellow.

I started calling the lady for help, and the dogs got more aggressive because of my yelling. I was reversing out onto the sharp rock and lost a shoe. At some point I got bit on the shin pretty good, but I don’t really even know which dog it was that bit me.

The lady arrived and got two of the dogs, I remember her saying that all these dogs weren’t hers. At some point, she said “GO!” and I replied that I had to get my shoe.

Somehow I got my shoe, and was headed down the beach.  I wasn’t that shook up, the whole thing seemed unreal. I ran into two people down a ways, and told them about the dog attack, they already had been warned. Apparently these dogs have a reputation.

My leg was bleeding pretty good, and I called my wife, then the police. The police came and we went looking for the house with the dog. We found the house with the three, but these dogs really only came to look because of the ruckus mde by the other five attacking me. We couldn’t find the front of the house with the five dogs, or if we did, the dogs were inside and the lady wouldn’t come out. The policeman wouldn’t walk out on the beach where I was attacked, and I don’t blame him, as he had no weapon to defend against dog attack.

Today, the policeman and I are supposed to go back, out to the beach, with the dog catcher.

Tomorrow and Monday are holidays here. Weather’s supposed to be good, .. Bring the weekend!

Got up and went running/walking this morning. I went down a new beach path, in the dark. I’ll have to go back and check it out later.

If I don’t see you tomorrow, HAVE A GOOD WWEEKEND!

It is a cloudy, lugubrious morning, there’s an eclipse going on now that I can’t see because of the clouds. But it’s not cold and windy and it’s supposed to start clearing up this morning.

This has turned to a weather blog. I’m not sure of a direction for this blog. Quiet times are good times, and nothing has been happening for me to post. For months.

I’ve been thinging about it a lot, and I’ve been through times like this before. I will get through it.

Cloudy, windy and cold. No running / walking for me this morning. I hit the snooze button and I could have stayed in bed longer.

Wrong side of a cold front

It’s supposed to be clearing up today, and we have a short week, Friday is a holiday!

I feel very groggy this morning. headache. I can tell I’m going to need a lot of coffee!

US President Obama visited Cuba this weekend with a whole slew of congressmen and CEO investors.

The US is a fat starving man and Cuba is a sandwich. I think that in the long run, this will be bad for Cuba.

…is making the same mistake over and over again.

Yesterday thought of an amazing topic, thought I’d never forget it, didn’t write it down, and can’t remember it now.

Looking forward to a good weather weekend and beach!

This week has been training week at work. There was the annual safety training, and my drivers license renewal to drive where the planes are. I’m all done now, so today it’s back to work.

I’m feeling a little brain dead this morning, I slept OK, but there was the problem of being super hot under the covers, and super cold out of them. This is a much coffee day. I’m on my second cup, at work, I plan on having at least two more.

I usualy listen to the news i the morning, this morning I listened to some music, it was nice. Maybe I’ll try that more often.

No news is good news.

Don’t look a gift horse in the mouth.

This morning I ran before shaving and making coffee. Actually, I walked most of the way. Feelin pretty creaky.

Today at work I have to renew my airside drivers license. Half day in the morning.