Skip to primary content
Skip to secondary content
Yesterday, at work, I stepped down off a fairly high curb, landed on some scrap concrete, and twisted my ankle to the outside. It swelled up like two hard boiled eggs taped to my foot. one on the top of my foot and one on my ankle. I went to the hospital emergency room and had X-Rays taken. Then I found myself sitting in a room with drawers marked “plaster” and also there were crutches hanging every where. I have a half of a cast on my foot. And crutches. My first cast, not my first crutches. I’m missing the dive as I type this. The weather has been perfect, and the diving spectacular. I haven’t been diving in a looooong time. 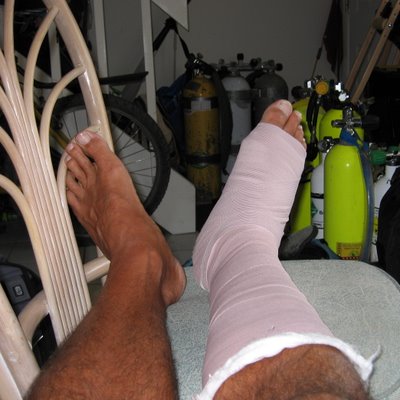 I have to figure out how to take a shower.

I’m getting ready to go to work again. I worked 12 hours yesterday. I’m overloaded with jobs I need to do but can’t get to them because of all these outside broadcasts, which I feel aren’t in my job description. They are, according to my “superiors” but I got lots more important things to do than sit there while announcers and salespeople talk. I just need to adjust my attitude, which is easier said than done.

It’s Friday BUTT it doesn’t seem like it. I have an outside broadcast this morning, probably all day, then another tonight and another tomorrow. I got a couple days off coming next week though. First thing this morning I have to singlehandedly try to get a satellite dish I put together yesterday on the pole. I’ll probably use both hands.

And I already called my #1 dive buddy about diving Sunday.

Here’s an abstract photo for you. Can you guess what it is? I think it’s tooooo easy! 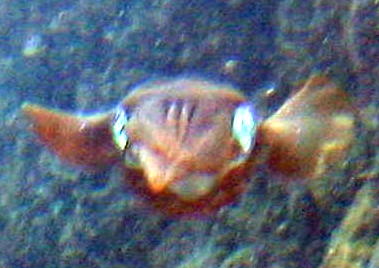 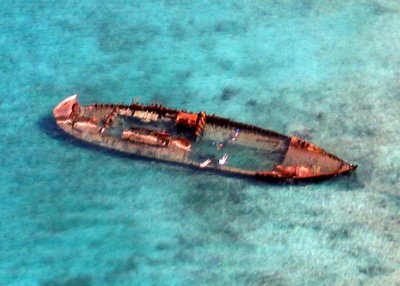 Blogger shrunk the pic this morning so you couldn’t really see the snorkelers. I think there’s 4. Two swimming out, one underwater, and one with blue fins. But maybe only two. or three. I didn’t see them from the air, I just saw them on the picture.

I’m back home, Yesterday I went to work from the airport, came home during the split shift and unpacked. Ths morning I felt disorientated. I had a hard time waking up. I wanted to go for a morning swim but I couldn’t find my goggles so I just took a shower and walked the dawg. Thank God for cold water!
Yesterday I “obtained” (bought used from a friend) an XM Receiver. I subscribed and it seems pretty cool.

Here’s some pics from this week. Click to enlarge! 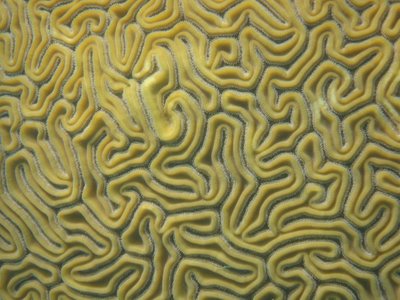 Close up of brain coral. Makes a great wallpaper 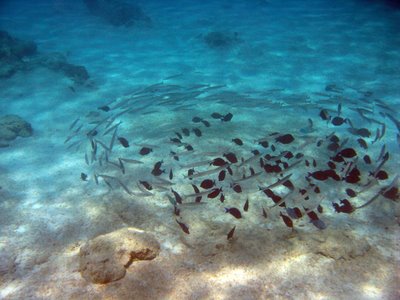 F
ish swimming in a circle just like on TV. 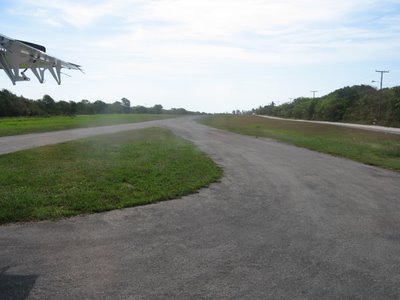 Turning around to take off from Little Cayman, This is the runway! 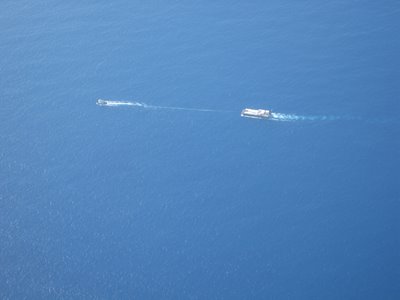 “
The Barge” that goes to Little Cayman and Cayman Brac once or twice a week. 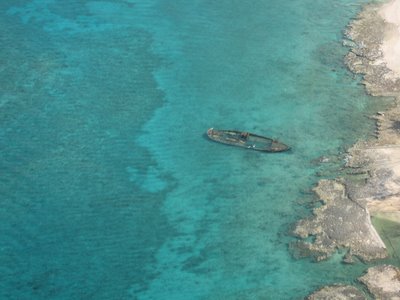 Shipwrecked, don’t let this happen to your ship. (see the snorkelers?)

26Apr05 0750
I am at the airport, getting ready to head back. I can’t decide whether to
go home, then go back into town to work, or just go into work tnd then go
home later. I’ll decide when I land.
I left my freekin keys in my luggage so I’ll be digging in my suitcase in
the parking lot…..
I had a productive trip, installed two new transmitters and fixed the
antenna. but we need to replace that antenna soon.
___
***

I’m on Cayman Brac. I haven’t had internet access while I’m here. I’m
emailing this from my phone. I will be back tomorrow. (Wednesday)
I am sitting on top of a big rock, waiting for my ride. It is hot!!
___
***

This morning I made an extra large pot of coffee, and I’m going to the airport this afternoon.

Yesterday work was ok as far as work went, it was practically a full workday. I felt obligated to go early, because of parking and because I expected it to be crowded. I parked on the grass by the sidewalk. I was wishing I had a video camera, as it was, I didn’t have my camera at all. There was this kid, about 3 or 4 years old I guess, maybe two. Blonde haired white boy. And there was this Jamaican, dreadllocks, dark dark skin, older, in his 20s or 30s. He would do some wild disco-type break dancing, spinning around on the floor on his back, jumping around, wild hand and arm movements and footwork, the wildest dancing you could imagine. First he’d take a turn, then the little kid would take a turn. He’d do handsprings and cartwheels and spinning around. It was amazing and hilarious to watch this child emulate this older guy. You could tell, even the Jamaican guy was amazed. (I say Jamaician because of his Bob Marley type hair, no other reason)

Friday I went snorkeling near where I went last week, another cruise shipper snorkel spot. There is a gully there I always wanted to snorkel in and never have. The picture below is from the end of the gully. The further “tower” on the right is where Hard Rock Cafe is. (to the right of the first light pole) 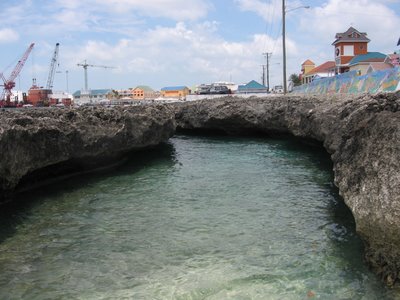 It was pretty cool. It’s maybe a hundred meters from Eden Rock, which was behind me as I took the pic above. It seems that squid must like that area, because I saw a whole bunch. I counted 18 in a group (flock, school, herd?) 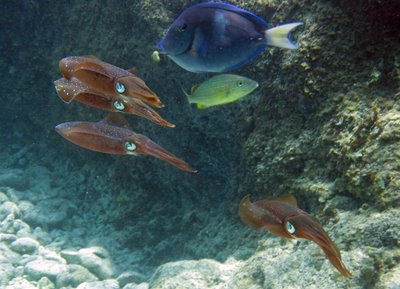 I am waitiing for a Squid Video to upload, when it finally gets done, I will put a link HERE. Notice how they change color as I swim towards them. Also, you can hear the bubbles blooping out of my snorkel as I go underwater.
Another thing that was funny was as I was gettng in, I heard tourists saying they saw “sharks out there”. I didn’t see sharks, and doubt they did either, but I did see tarpon, and big ones at that! 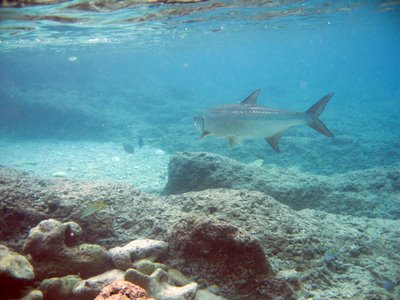 I just got a plain white page.
Today was the second day.
I went to my settings page and republished my template and it works ok now.
today I’m working. Dont want to.
Tomorrow I’m going to the other island to work for a few days. I will see the OI Girl. We had a fight yesterday. The dog ran away. He’d be 10 feet from me and I’d call him and he’d run the other way. I was mad because I spent all afternoon looking for him. Then when the neighbor caught him, apparently to the OI Girl I was supposed to be happy he was back and forget I wasted my afternoon. I didn’t yell at the dog, I didn’t hit the dog. OI Girl implied that I’d have a hard time raising kids if I was upset about the dog running away. I wasn’t really upset untill she brought it up, twice.
I tell you what, kids would have been punished a lot more than the dang dog was for that.
Yesterday afternoon was a major part of my weekend, that I didn’t plan on wasting.
I am in an unpleasant mood.
Another reason I am in a bad mood is because I have met the guy who is the biggest slacker I have ever seen. Plus, I’m coming to realize, that every time he opens his mouth, bullshit comes out.

I wonder if I’ve already used that title before, probably.
Is it Friday? It cannot be! It seems like it was just Monday a few minutes ago. Well, it doesn’t matter to me! I’m working tomorrow, and flying Sunday, so that means no diving. (You aren’t supposed to dive for 24 hours before flying).

I’ve ridden my bike every day all week. I can’t figure if I should drive today or ride. Ride I rekkon!

Since I don’t have a picture to post, heres one I drew. It is an island, with a dock and beach chairs and a boat and palm trees and beach. 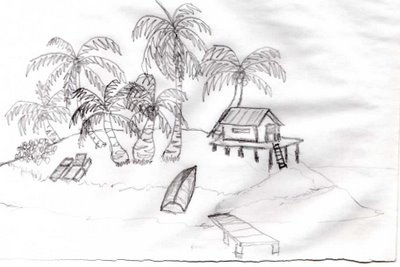 Laugh if you want, I know I can’t draw. I want to learn to draw banana plants, that way I don’t have to eat only coconuts on my island. I heard a story about a little kid who asked what a group of people were doing. The kids Mom said they were taking an art class to learn how to draw. The little kid replied, “You mean they forgot?” Little kids know how to draw, they don’t know or care if it’s any good or not.
That’s the way it should be.
I know I can’t draw worth a dang, I know my drawing sucks.
But I don’t give a rats ass!