This morning I went for a dive, then I came home and took a nap. Now I feel like I should go out and do something, but I just feel lazy.
Tomorrow at work I’ll be wishing I hadn’t wasted the day today! 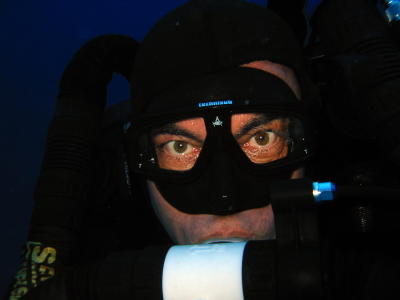 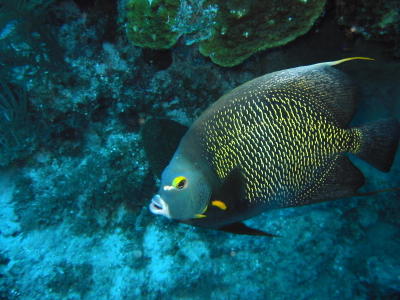 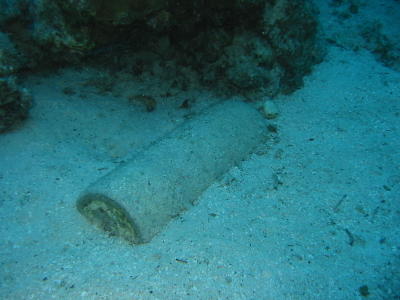 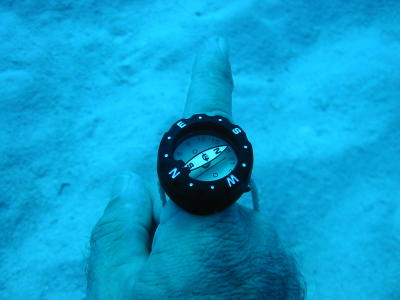 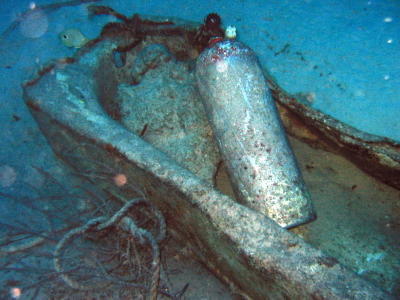 I went diving at one of my favorite spots, Fishermans Dock Marina (that’s what a dive buddy of mine named it, it doesn’t really seem to have an official name). Got an OK shot of a French Angel fish. I found a scuba tank. If it was full of air, it would still be good to use, but it was full of water, and very heavy. I decided I would add it to the bathtub, an underwater landmark that I use at this dive site. I carried it (because I didn’t want to restow my lift bag after deploying it). Plus you know I love walking and running fin-less underwater! I took off my fins and jogged across the sand flats, stopping to check my compass. I got to the mini wall and turned right, and jogged on till I found the bathtub. I tossed the tank in it. I found some rope there so I tied the tank to the tub.
Then I went and did my deco, and took some close-up pictures of christmas tree worms. And a tiny fish in a tiny hole. It was a very good dive. 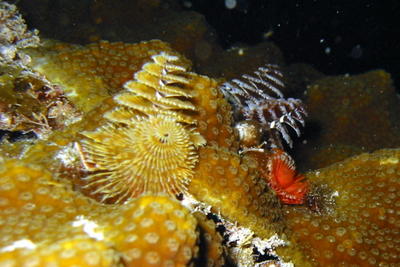 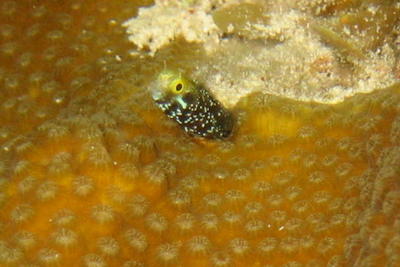 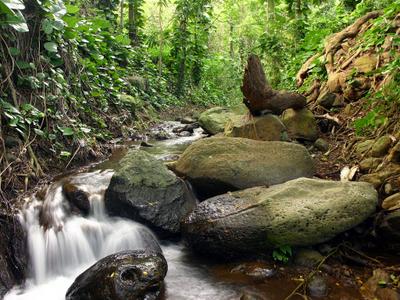 Picture yourself near a stream.

Birds are singing in the crisp, cool mountain air.

Nothing can bother you here. No one knows this secret place.

You are in total seclusion from that place called the world.

The soothing sound of a gentle waterfall fills the air with a cascade of serenity.

The water is clear.

You can easily make out the face
of the person whose head you’re holding under the water.

CLICK ALL PICS TO ENLARGE!!!
The first pic shows the new antennas on the left and the old antennas on the right. The leg on the left points directly north and has 105.3’s antenna on it. the antenna on the right is for 89.9 FM. See the two guys up there working? I’ve been up there! It’s spooky to me! Maybe I’ll climb up there tomorrow and take some pics for my blog!! Maybe NOT!!!

Today was an special day at 19.2 degrees north latitude. On the earth, the sun is directly overhead at the tropic of cancer at the minute summer begins. That is the longest day in the northern hemisphere and the shortest day in the southern. (It’s also the first day of winter in the southern hemisphere). Spring and autumn begin the minute the sun passes over the equator, those days are equinox’s, the day and night are equal length. Everywhere on the tropics, the sun passes directly

overhead twice each year. I like to figure out which day it is because I think they’re the best days to go to the beach, so I happened to have in my calendar that it was today at 12:32. As you already read, I was out by the tower, watching the new antenna installation. So I took some pics of the sun as it passed overhead, I mean directly overhead. This would never happen outside the tropics.
The sun isn’t visible in the first pic, but is very close to the teeeny opening you can see at the very top of the tower. (the tower is

like a very tall pyramid, with a straight up and down piece at the top, a 260 feet tall pyramid).

The bottom three pics didn’t come out well because the sun was bright and made the pictures dark, I had to brighten the heck out of them. There were some clouds overhead, and I figured it would ruin the pics, but actually they saved me, because they filtered the sun. The middle one is the best because the clouds are covering about half the sun. The sun is so directly overhead that if you were in the bottom of a well the sun would shine all the way to the bottom, a naked telephone pole would have no shadow at all!

Today new antennas are being mounted on the tower. That means first the old ones have to come down. That means we’ll be off the air at least all day today and probably till lunchtime tomorrow. I get to do several projects I’ve been wanting to do but haven’t been able to because I didn’t want to take us off the air. And I didn’t want to get up in the middle of the night to go take us off the air when we have theoretically the fewest number of listeners. It should be a very good day.

Last night was gas blending night. I went to my dive buddys garage and we blended gas for diving. With diving, nitrogen is increasingly narcotic with depth, not good when you’re diving. Oxygen becomes toxic beyond a certain depth, that depth depends on how much O2 is in the gas you’re breathing. (The max operating depth for air is about 209 feet.) Since air is about 20.9% O2 and 79% N2 (nitrogen), we need another gas to keep the level of either O2 or N2 from getting too high. Helium! Helium is inert, it isn’t narcotic or toxic. It’s a little complex to explain here, but anyway, I have all my diluent bottles and bailout bottles filled and ready to go for some excellent rebreather diving coming up!!

My post this morning didn’t work so I deleted it, It was an animation that didn’t work properly when I posted it, but I thought maybe it was a problem with Firefox, so I came to work and tried it with Internet Explorer and it was still screwed up looking. So I deleted it.

I stayed up late two nights in a row. I’m not complaining. But I like getting up early. Today it was 5:40 when I got up! (that’s late)

Sometimes I post a post here and wait a really really long time, like a whole 10 or 15 minutes, then I come back and check and nothing! Not a single comment. 15 whole minutes!! Dang! I feel so ignored! Torture me people!

And I wish I got more comments on my blog, when I don’t get comments I feel like it’s boring, which I know it is. I noticed that nowadays I check for comments even before I check my email!

Also I notice that when I post a post, it usually stops the comments on previous posts… I’m not the only one who notices that! (Hi Wanting More!)

This morning I woke up, went diving and came back home and went to bed for a few hours. Then I took my dog to the beach, had a swim, came home and gave him a bath and now I’m making coffee thinking about supper. I don’t normally drink coffee this time of day and I’m not hungry, but that’s what I’m doing.

The dive was kinda dry. I figured it would be spectacular since I forgot my camera. But it was murky, and we didn’t see much. Dry is a weird way to describe a dive, but that was what I was thinking, “it’s kinda dry down here today”.

Yesterday, I worked a full full day, as is normal whenever I want to try to escape early. But it’s ok.
I went diving yesterday afternoon, it was great but there was a strong current, you could swim comfortably into the current and stay still, if you kick a little more you can progress ok, there’s never any hurry underwater. My camera can take short videos and I took one to show the current. It’s about 5 seconds long and shows some soft coral flapping in the U/W breeze and you can see particles in the water whizzing by.
My dive buddy took off his fins and was walking along the bottom. He asked if I wanted to race, him without fins and me with. I said sure (all through sign language). 1-2-3 GO and I started kicking as hard as I could into the current and I looked behind me and there he was, right on my tail. I was getting tired fast, kicking as hard as I could. I was ahead but he seemed way more efficent without fins in that current. I’ve done it before too, take off my fins and walk or run along the bottom, it is really fun. There’s less gravity than the moon, not that I’ve ever been there. Here’s two pics of him running underwater, carrying his fins. 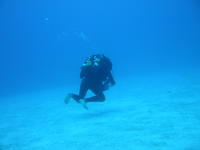 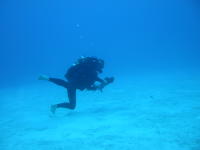 Then I came home and tried to get audio on this blog. I created a Yahoo group, tried to set it up so nobody has to be a member for access, then link from here to the files section. It seemed like it worked for a while but then quit. I guess yahoo changes some portion of the web page address periodically, it worked from on my computer and another computer (on which I wasn’t logged onto either blogger or yahoo) for several minutes at least. Then quit working everywhere at once. I reposted and it did the same thing.
Thanks to those who replied to my “test” post last night. (I deleted it)
Anyway, I’m drinking cuppa coffee number one and going to work for a while later today.
Have a great day!

Woke up late this morning, 5:35. Clouds look like they’re going away (it got cloudy just before noon yesterday), its Friday. I gotta funny feeling I might be getting sick around lunchtime and have to take the afternoon off. I think about a one hour dive this afternoon might be the cure I need. Or an afternoon on the beach.
Of course, the days I feel like this are usually the busiest, most chaotic, work-late days of them all.
hmmmm
Weee shall seeeeee…………